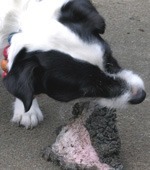 by Mary Voss of GreenTripe.com

William Pollak, DVM
“Health is an inevitable by-product of natural raw foods for our pets.”

I am sure you are thinking, “… what is Green Tripe & why devote a whole page to it?” The answer to that is simple, because it is the best, most natural food you could feed your K9 friend. It has been a well-known secret of top breeders/kennels of performance dogs for years. The following excerpt from Juliette de Bairacli Levy’s book, The Complete Herbal Book for the Dog, says it best:

“I would suggest breeders make good use of such flesh foods as the following:… paunches of all animals (the raw, uncleaned paunches of healthy grass-fed animals can be fed with much benefit to all breeds of dogs). I learned this from a gypsy in the Forest of Dean: this man had bred many famous greyhounds, & he told me that such fare was the finest of natural food tonics.”

Tripe is the stomach of ruminating animals. These animals (i.e. cattle, buffalo, sheep, deer, goats, antelope, etc.) are classified as being four-footed, hooved, cud chewing mamals with a stomach that consists of four chambers. The four chambers of such a stomach are known as the rumen, reticulum, omasum & the abomasum. The food the animal eats (i.e. grass, hay) is swallowed unchewed & passes into the rumen & reticulum where it is then regurgitated, chewed & mixed with saliva. It is again swallowed & then passed through the reticulum & omasum into the abomasum, where it is then further broken down by the gastric juices, amino acids & other digestive enzymes. Yummy!

So how can something so disgusting, be so good? These same gastric juices & enzymes not only aid the animal in digestion, but also aid the dog in digesting & efficiently utilizing his food. The amino acids are necessary for muscular development &, the other gastric juices, I believe, are the best cleaner for their teeth!

In an analysis of a sample of green tripe by a Woodson-Tenant Lab in Atlanta, Georgia, (see end of this article for full details) it was discovered that the calcium:phosphorous ratio is 1:1, the overall pH is on the acidic side which is better for digestion, protein is 15.1, fat 11.7 & it contained the essential fatty acids, Linoleic & Linolenic, in their recommended proportions. Also discovered, was the presence of Lactic Acid Bacteria. Lactic Acid Bacteria, also known as

Lactobacillus Acidophilus, is the good intestinal bacteria. It is the main ingredient in probiotics.

Finally, because of its rubbery texture, serving it in large chunks also aids the canine in strengthening its jaw muscles & has an added benefit as a form of canine dental floss. The white tripe that you find in the grocery store has been cleaned, scalded & bleached. It has almost no nutritional value for the canine. This tripe is usually found in dishes such as menudo.

Green tripe does not necessarily refer to it’s color. In this instance it refers to the fact that it has not been touched – not cleaned, not bleached & not scalded. It’s actual color is brown, however, sometimes there will be a greenish tint due to the grass or hay the animal ate just before slaughtering.

Nothing beats the “green” tripe from a freshly slaughtered animal, but in an effort to make our lives easier, there is now available green tripe that has been ground & frozen, packaged in different size packs & it looks something like this:

Dogs were in existence long before the creation of kibble. So how could they have possibly survived? In the wild, a dog will catch it’s food & devour nearly all of it… the flesh(good source of protein), fat (a good source of energy), bone (good source of calcium), muscle & organ meats, & the stomach with its contents (a good source of enzymes, minerals & pre-digested plant material consisting of herbs & grasses).

Whether you wish to admit it or not, dogs, both domesticated & wild, are members of the carnivore family. Anatomically, they are built for it. No one describes this more eloquently than Juliette de Bairacli Levy in her book, The Complete Herbal Book for the Dog A Handbook of Natural Care & Rearing:

“… the dog is a meat eater, from the teeth fashioned for tearing & crushing, the powerful jawbones & muscles, the small, very muscular stomach, the short intestines (to avoid putrefaction of flesh foods), & above all, the very powerful digestive juices peculiar to the carnivorous animals – digestive juices that can dissolve even lumps of bone. In health, the dog’s juices, both of mouth & stomach, are strongly antiseptic, & thus “high” meat & even flesh from diseased animals – food which would kill a human being in a day – can be eaten without harmful effects.”

cat-tripe.jpgMs. Levy’s philosophy of raising dogs is called Natural Rearing & it means just what it says – raising the canine in such a way as to reproduce the way they would exist in their natural state. Natural rearing diets, such as NR (Natural Rearing) or BARF (Bones And Raw Food), are based on fresh foods such as raw meats, raw bones, raw vegetables & herbs. Because dogs in the wild would not eat every day, one day of fasting (only for adult dogs) per week is also recommended. This allows the animal to cleanse its body of toxins.

Cooking breaks down many of the proteins & amino acids in raw meat, thus destroying much of it’s nutritional value. The canine being not only a hunter, but a scavenger as well, & will be able to exist on a diet of cooked food, but it will not be in optimal health. I guess a similar comparison would be to place a human being on a strict diet of only MacDonalds hamburgers & fries for the rest of his/her life! Raising your dog on poor diets will eventually have its effect – disease, immune deficiencies, short life span, high vet bills, the list is endless. Thanks to the works of Juliette de Bairacli Levy, Dr. Ian Billinghurst, Wendy Volhard & Dr. Kerry Brown, a step in the right direction (back to nature) has been taken. Their books have been & invaluable source of information for all dog owners. (Author Unknown)

In an analysis of a sample of green tripe by a Woodson-Tenant Lab in Atlanta, Georgia, it was discovered that the calcium:phosphorous ratio is 1:1, the overall pH is on the acidic side which is better for digestion, protein is 15.1, fat 11.7 and it contained the essential fatty acids, Linoleic and Linolenic, in their recommended proportions. Also discovered, was the presence of Lactic Acid Bacteria. Lactic Acid Bacteria, also known as Lactobacillus Acidophilus, is the good intestinal bacteria.

Back in Stock Notification Sign up below to receive an email notification once this item is back in stock online! Your pet will thank you.
Scroll to Top